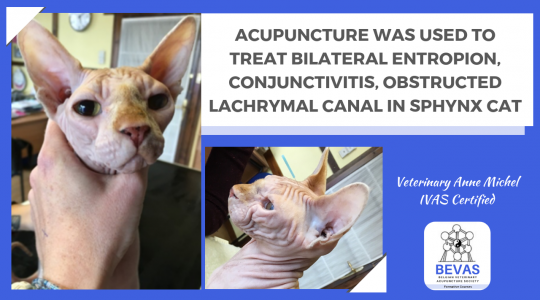 Adam was born with bilateral entropion which wasn’t fixed by surgery. It upsets him and had a chronic conjunctivitis and epiphora.

Adam shows sometimes an aggressive behaviour. And have often loose stools. He is a very fearful cat. No preference for cold or warm places but likes to be hidden.

No scars except castration scars on scrotum.

At one year old he did some seizures, but it stopped. This was never investigated.

Owner wanted me to help for his eyes.

Adam is really upset. On the table, he seems angry, his eyes are nearly totally closed and show clear abundant epiphora. He has severe bilateral entropion and the conjunctives are red.

He is in good shape.

Teeth are brown (since he was young said owner).

No further exams have been done except fluorescein test which was negative for corneal ulcers but positive for stocked lachrymal canal.

Resolve inflammation of the eyes, calm the cat, make him more comfortable.

PRESCRIPTION: POINTS USED AND WHY

I only could put 3 needles on the first session cat was furious!

GV20: help spleen in its raising action to lift the eyelids

Gb34: helps liver in its function to ensure smooth flow of Qi

I said to the owner that Adam won’t recover fully without surgery and prescribe her lachrymal drops to lubricate and help against irritation of corneas by the eyelids.

4 October 2017 Adam is back, totally different and relaxed. Eyes are wide open. Owner said she did not have to buy the lachrymal drops and that Adam is calmer at home and less angry.

I attempted to put 5 needles, but Adam accepted only 4:

Sp6: crossing point of 3 yin meridians of the hind leg si will tonify spleen function of T and T and release dampness, benefits liver and kidney

PC6-TH5 transfixing: PC6 to calm the shen and TH5 to calm liver Yang

Adam relaxed during session and went to be petted on my shoulder after the session!

He now had his surgery and does not need me anymore, since his eyes are better he is not angry anymore!

REFLEXION ON YOUR EXPERIENCE
Adam was my first cat case in acupuncture and I wasn’t very comfortable with him the first time but when I saw results with only 3 needles putted in very bad conditions, I feel now more confident.

PrevPreviousACUPUNCTURE: A Scientific bases therapy recognized and accepted by WHO.
NextAcupuncture was used in the management of an 11 years old gelding suffering from CHRONIC OBSTRUCTIVE PULMONARY DISORDERNext 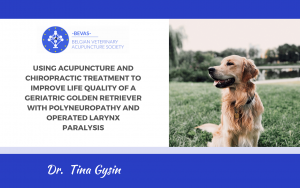 Acupuncture Used To Treat Biceps Tendinitis In a Border Collie

By Ivana Rudolfová, DVM Abstract Acupuncture therapy was used to help to improve pain level and chronic lameness on both front limbs in an older