Started a private practice in Ramsel Belgium at the end of 1977. 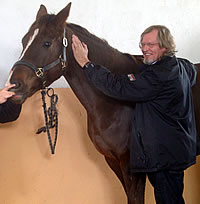 Since our Western medical system did not give me good solutions for all the problems found in our patients, I started studying homeopathy, but was not pleased with the not repeatable results. So I started studying acupuncture with the BVGA (Belgische Vereniging voor Geneesheren Acupuncturisten). Since this was a human course I went to visit many known veterinary acupuncturists: those who left the most impression on me were Dr. Marvin Cain, Dr. John Limehouse and Dr. Oswald Kothbauer.

In 1984 I was IVAS certified (International Veterinary Acupuncture Society). Since then my practice has grown into a manly equine acupuncture practice.

I have had the pleasure to teach in many countries, which gave me the chance to make a lot of friends. Helped to organise Ivas affiliated organisations and acupuncture courses in most of Europe and even in Brasil.

I got rewarded with the first Oswald Kothbauer Medaille in 2008 for promotion and education of veterinary acupuncture.

In 2017 I received from IVAS the recognition to my work as a Veterinary Acupuncturist and as a Acupuncturist teacher with the prize: “Life Time Honor Roll Member” for which I feel very happy and grateful.

My name is Albert Snijders.

I was born and raised in the Netherlands as a son- and grandson of Albert Snijders, both veterinarians.

I graduated from the “Rijks Universiteit Ghent”, veterinary faculty in Belgium in 1988.

I founded a small animal clinic in the outskirts of Brussels, Belgium in 1989, where I practice until today.

In 1991 I obtained my IVAS diploma and in 2003 became a qualified veterinary osteopath.

I have been involved and teaching in the Spanish IVAS course for 10 years now and lately in the Belgian IVAS course too.

I have lectured on veterinary acupuncture in various IVAS courses in Portugal, Spain, Chile and Belgium

I am the co author of our book Acupuntura en Veterinara, published in 2009.

I graduated from the Barcelona Veterinary University in 1990, with a specialization in Equine medicine.

University in 1990, with a specialization in Equine medicine.

I started my acupuncture studies in 1996, attending a course for human doctors at first, because there was no veterinary course available in Spain at that time.

In 2001 I became the first IVAS diplomated veterinary acupuncturist in Spain. 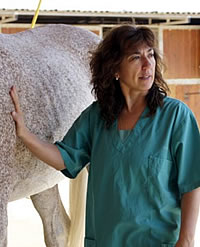 In 2003 we started the IVAS acupuncture course for veterinarians in Spain, which runs until today.

I have a postgraduate diploma in Homeopathy, obtained at the Barcelona Veterinary school 1998 and am a qualified equine Chiropractor (Option for animals, Illinois, USA 2003).

In 2012 we anchored veterinary acupuncture in Spain by founding IVAS España, the official Spanish branch of IVAS.

I have lectured on veterinary acupuncture in various IVAS courses in Portugal, Chile and Belgium and made introductory classes at the universities of Barcelona, Madrid, Valencia and the Canary Islands.

In 2009 My husband and I published the first complete book on veterinary acupuncture in the Spanish language: “Acupuntura en Veterinaria”.

My name is Dr. Juliet. I’m from Belgium. It sounds like a stereotype but I knew that I wanted to become a veterinarian since I was a little girl.

Since I was 14 years old I knocked on other veterinarians doors to ask if I could assist them, learn. I started with holding animals, cleaning cages. People tried to persuade me to study agronomical engineering etc. but no, I enrolled my veterinary studies in the University Of Liege, Belgium. Six years later I got my diploma of ‘allopathic veterinary medicine’. 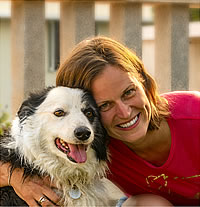 I could make great differential diagnoses and prescribe symptomatic treatment for all those diseases out there. But my life path is not a common one. During one work experience I saw a dog walking in very stiff and in pain and walking out after acupuncture needling like a young puppy… I wanted to learn more about it, placebo doesn’t exist with animals so I called a great acupuncturist Dr. Emiel Vandenbosch who was really straightforward. “You have to learn the right basics” he told me. So I went to study Chinese Medicine with the human doctors, osteopaths, physiotherapists.

Together with my husband we went on a trip around the world with our own car for nearly 4 years. The red line of our project was to protect the endangered species in their natural habitat, to work with local communities to protect their ecosystem. Check it out on www.bearoundtheworld.be.

I had the chance to work in very remote areas and with amazing indigenous people and healers. It became very clear to me that everywhere in the world ancient traditional medicinal knowledge systems have so much in common : prevention, better quality of life, no harmful side effects and ‘peeling the onion’ to find the root of the problem (and yes, emotions can be the root cause…). 90% of the traditional medicines have that common base.

‘Treat the root not the symptoms of the disease and don’t let the weeds come back.’ It is mainly all about prevention and this is cheaper in the long term. So I became an Integrative veterinarian and got my diploma in Chinese medicine (acupuncture, Chinese herbs and Food therapy) nine years ago from IVAS (International Veterinary Acupuncture) through BEVAS.

Since three years I’m happy to be one of the BEVAS teacher’s team. Sharing knowledge with other vets from all over the world is really something that gives me the kick to continue exploring and learning about traditional medicine.

Now that I’m in India I’m studying Mrugayurveda and ethno-veterinary practices at TDU Bangalore. Since two years I also use daily ethno-veterinary knowledge, herbs and Ayurveda to diagnose, treat and prevent disease in small animals.

With an allopathic mind set, our society has lost patience. Healing needs time. There is no quick magic product out there. People have to understand that the body needs time to heal in a balanced environment.

It’s a complete package I try to offer to my clients with the aim of improving the quality of life of my patients and… their owner. « Happy Pet, Happy Owner »

Alternative medicine is part of my daily life. It’s a philosophy of life. It changes your perception on our society and we never stop learning. I find it very important to make people aware that even in the city; medicine is growing in their backyard and is also available in their own kitchen.

I’m passionate about transmitting my knowledge to others because that’s how I believe I can bring a bit of change and impact positively the world for the future generation. 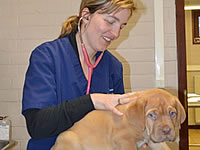 Being born as the daughter of 2 veterinarians, I realised that I wanted to become a veterinarian too when I was 3 years old. I loved helping in the clinic, taking care of our own family farm animals and spending time playing outside with our goats, sheep, dogs, cats and horses.

Having acupuncture teachers over in our house from all over the world for the IVAS cources since 1984 it was very common to hear “acupuncture discussions” around the family table ever since I was a little girl. I can say that I really grew up with acupuncture and my intrest in acupuncture is still growing every day. 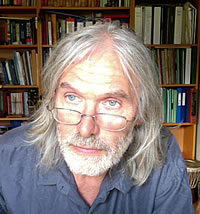 During Veterinary school I studied human homeopathy at Arcanum in Gothenborg, Sweden.

After Vet-school I practised 6 months in a country practise in western Norway, mostly cows and sheep.

In 1980 I started to study human acupuncture under Dr. Georg Bentze in Oslo, Norway.

In 1980 I also started to study Antroposophical medicine in a group of doctors situated at Vidaraasen in Norway.

I worked 3 years in northern Norway occupied mostly with food-hygiene, slaughter control and bacteriology. Besides this I took part in the general weekend-practise (working every 2-3 weekend), ran a 2 evenings a week small animal practise and finally a one evening a week human practise with acupuncture, anthroposophic medicine and homöopathy.

Since 1981 I run a holistic private practise with both horses, small animals as well as humans in Sandefjord, Norway.

I organised and lectured as only lecturer in the first full IVAS-education for veterinary students in the world. This was held at the veterinary schook of Oslo in the years 1997-98.

I have published 26 articles (see under).

Local lectures, articles and courses are given in great number.

I have lectured at 5 International congresses.

In 1984 I started to treat cancer patients, both human and animals, and this practise resulted in the investigations described on www.sanare.no.

12 anti cancer peptides were found in the blood of patients after acupuncture treatment against cancer, and these 12 peptides are now patented.

2000 I studied veterinary equine osteopathy under DO Pascal Evrard, finished 2001.

2002 my x-wife (Annica) and I started “Scandinavian School of Holistic Horse- therapy” (SSHH), which have been very successful, and 200 students are under or have been graduated.

February 2011 I divorced Annica, moved from the farm, and reopened my old clinic in Sandefjord.

Doctor in veterinary medicine with a residency training in veterinary anaesthesia and analgesia, acupuncturist, osteopath and shiatsu therapist for animals. 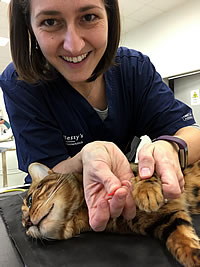